Very few desserts come more classic than this delightful Poires Belle Helene. The dish is essentially poached pears with a chocolate sauce but certainly sounds so much more enticing with its beautiful enticing French name.

The dessert was reputably invented by the godfather of haute cuisine, Auguste Escoffier in Paris in the 19th century and purportedly named after the opera, La Belle Helen (the beautiful Helen)  by Offenbach.

Without a doubt, the ease of preparation and beautiful presentation make this dish a stunning dessert for a dinner party, which is bound to impress but is equally impressive at any meal. What is not to love about pears, chocolate and ice cream; heaven in the bowl. 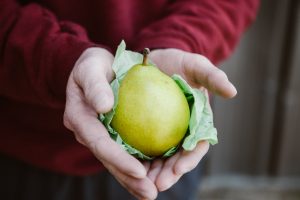 Start by making a sugar syrup:

Combine the cinnamon sticks, sugar, and half a cup of water In a medium saucepan. Bring the mixture to a boil, and then reduce the heat and simmer for 2-5 minutes, until it becomes a thick like syrup and turns golden brown. Turn the heat to the lowest setting and gently whisk in the remaining 2 cups water, until the syrup is completely incorporated into the water.

Add the prepared pears to the sugar syrup mixture and bring to a gentle simmer for 15 minutes.

Test the doneness with a knife by pricking in the thickest part of the fruit; the pears are poached when they are just cooked through, but not completely soft. Be very careful not to overcook or the pears will collapse, Bosc pears are renowned for doing dissolving too quickly.

Allow the pears to cool in the syrup until they are at room temperature. Lift the pears carefully from the pan with a slotted spoon.

Serve with two small scoops of vanilla ice cream and a drizzle of chocolate sauce.

How to Core a Pear

Lay the pear on its side. Using a sharp knife, take a thin slice from the base of the pear; this will expose the core and also create a flat surface on the base, so much better for serving the pear.

Take a paring or vegetable knife and very carefully cut tight in and around the core ( keep as close as you can to the core so as not to spoil the fruit or risk breaking through. The core should come away easily, if not use a teaspoon to scoop it out.

Which Pears to Use for Poire Belle Helene

Choose firm but not overripe, unblemished pears making sure the stem is still intact. A favorite is the Bosc pear, which has smooth, even skin and shape, making it easier to peel.

Or, use any pear with similar characteristics.

Recipe and words from: https://www.thespruce.com/french-pear-dessert-poires-belle-helene-1375196

+ There are no comments